Whenever people ask me how present authentic feeling steppe cultures in D&D settings I tell them they need 2 things: kumis and wrestling. While kumis is basically a universal across the Eurasian steppe (the Ghuzz Turks of Ibn Fadlan's time certainly drank it), wrestling is more of a Mongolian pastime. From what I've read, there is no evidence that there was any wrestling going on along the banks of the 10th century Volga river, but that should not be a barrier to putting Mongolian-style wrestling in the Meager Country or in any setting where nomads abound.

I've had great success running wrestling tournaments with the rules below. They're adapted (mostly verbatim) for 5e from Joseph Manola's Mongolian wrestling rules (read the whole post if you want to learn more about Mongolian wrestling). It's a great deal more interesting than resolving wrestling matches with contested athletics rolls and provides a fun minigame, a break from the drudgery of combat and negotiations. 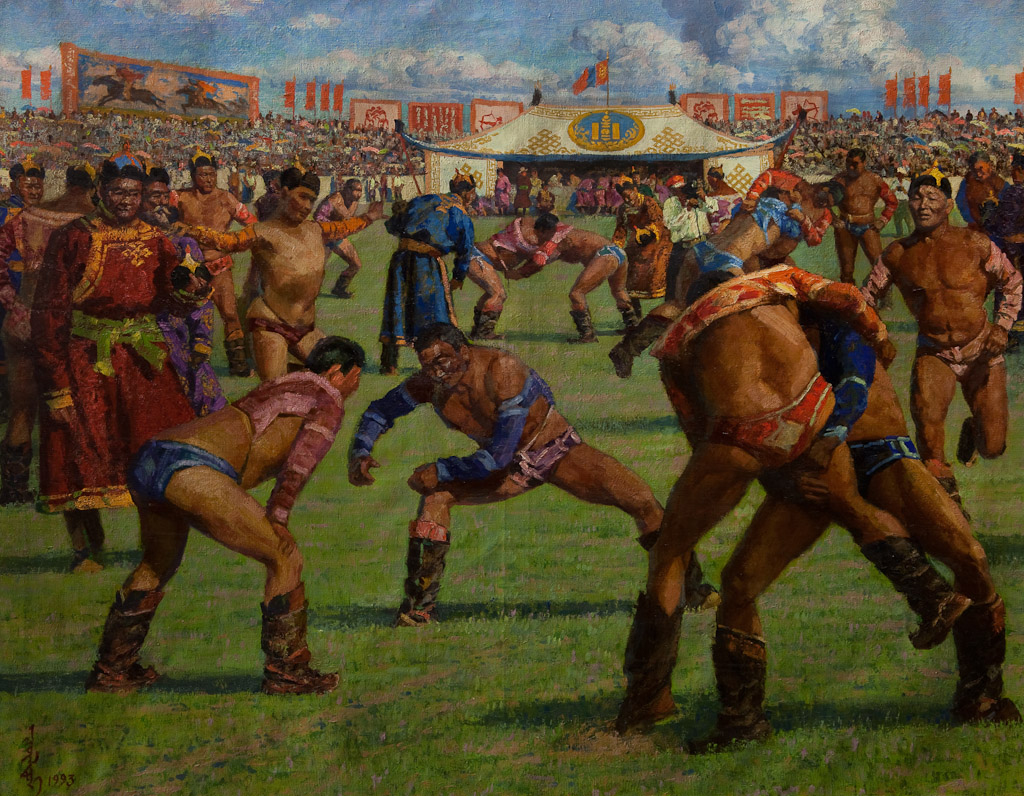 A painting of the eriin gurvan naadam

To resolve a wrestling bout, each wrestler rolls 1d6 and adds their Wrestling Rating.

-Your basic Wrestling Rating is equal to the sum of your Strength modifier, your Dexterity modifier, and your proficiency bonus if you're trained in athletics and/or acrobatics.

-Trained wrestlers add an extra +1 to their Wrestling Rating. Being an expert wrestler increases this bonus to +2. Most natives of the steppe are trained wrestlers.

-If you've studied the technique of your opponent, you may add your Wisdom modifier to your Wrestling Rating. To study an opponent's technique, you must wrestle with them once or watch them compete in two bouts.


-If you are substantially larger and heavier than your opponent, add +1 to your Wrestling Rating.


If one wrestler beats the other's score by 3 or more, then they score a quick victory and their opponent goes down within minutes.

-Unless their scores are tied, the wrestler who scored the lowest in the first roll has their Wrestling Rating reduced by 1, to represent their dented confidence.

-Each wrestler adds their Constitution modifier to their Wrestling Rating, to represent the importance of stamina in the long bout

In the long bout, the highest score wins and a tie indicates a draw, probably because someone bungled a throw and ended up hitting the ground at the same time as their opponent.

Rule Variant: The long, long bout (for those who want more attrition in their wrestling)
In the long bout, you must beat your opponent's score by 3 or more to win. Ties do not result in draws.
If nobody wins the first long bout, repeat the process until one wrestler is victorious.

-As per the first bout, unless the their scores are tied, the wrestler with the lowest score has their Wrestling Rating reduced by 1. This effect stacks

-In the long bout, draws only occur if the competing wrestlers have the same Wrestling Rating and their scores tie.


Tournament Rule Variants
From my limited research, I've gleaned that Mongolian wrestling matches are usually best of 1 affairs, but I find that it's more interesting for the whole party if they all can participate in winning the tournament.

Teams: Wrestlers do not compete individually, but as part of teams, who take turns in best of 1 matches. The wrestlers who aren't in the match can watch the bouts of their competition to study their technique. If you decide to be one of your team's supporters, you cannot participate as a wrestler. (We may imagine that because the party is made of foreigners they're allowed to compete in a team as a crutch)

Best of 3: Matches consist of 3 bouts instead of 1. (This gives wise wrestler a chance to study their opponent's technique)

But why would you want to compete in a wrestling tournament? Here are some possibilities:

1. Loot. Some local khagan or war leader is offering the spoils of war, perhaps an item the party needs, as the grand prize in a wrestling tournament

2. Respect. The party may have the khagan on their side but they'll never win the trust of the whole community unless they compete in the upcoming wrestling tournament

3. Assassination. A notable person, a thorn in the party's side, is competing in a wrestling tournament. It would be so easy to snap their neck if you can just get a good pin.


Wrestling Titles
You should make sure there are some good titles up for grabs in your tournament. Roll 2d10, one for an adjective and one for a noun to generate a simple title. Let your players write it on their character sheet if they win it for themselves (maybe the opponent they got it from will come to win it back later).

Further reading: Here's a clip from the reality tv show Last Man Standing, it shows what a Mongolian wrestling tournament looks like and what a bout between a trained wrestler and a novice looks like.


This post is dedicated to Borte, first empress of the world
Posted by T AKW at 9:14 PM 3 comments:

Trade in the East Slavic Camp by Sergei Ivanov, 1913
An image that is always close in my mind when I imagine the Meager Country


As I prepare to run another Meager Country game, I’ve been refamiliarizing myself with the sources that originally inspired the setting. In particular, Ibn Fadlan’s account of his embassy to the Bulhgars as well as the other sources contained in the book “Ibn Fadlan and the Land of Darkness.” Over the course of this exercise, I’ve been reminded of all the things the Meager Country is supposed to capture and all the different directions I could take it. To focus myself, I have written this: My Meager Country Manifesto.

Really, the goal of the Meager Country is to inspire in players a similar sense of danger, strangeness, disgust, fascination, and fear that Ibn Fadlan experienced while meeting the Turks, Bulhgars, Khazars, and especially the Rus. This mix of sensations and the desire to question that goes along with it, I feel, can form the compelling heart of a D&D game.

Of course, Ibn Fadlan is a very unique voice among the small body of documents we have which record the time period I’m interested in. Fadlan’s account is incredibly early (from 922) and he sees things which no other source mentions, like the now classic burning of a Rus leader with his ship.
When other Arabs find themselves in eastern Europe later, such as Abu Hamid al-Andulust al-Gharnati, who started his journey in 1117, almost 200 years after Fadlan, they find a very different world and had very different reactions to it.

Eastern Europe is like a second home to Abu Hamid. There are Muslims and Christians everywhere, the leaders want to learn from Abu Hamid and listen to his shitty poetry. There is nothing to provoke in him that complicated knot of reactions which Ibn Fadlan feels.

In short, I am interested in a time in history that’s as thin as a knife’s edge. The 10th, or maybe even 9th, century which contained a northern world where Islam and Christianity were just beginning to penetrate but had not had any major victories. It was a time when mountains of silver were flowing from Samanid mines onto the Volga to the city of Itil, to the Don river and up, up to Kiev, up to lake Lagoda, up to Birka. Trade was drawing the world together. Alliances between Slavs and Turks and Rus and Magyars with Rome or Constantinople or Baghdad were being formed and faith would cement those fledgling bonds. This is where we find Ahmad Ibn Fadlan, called by the Caliph to bring Islam and 4000 dirhams to Bulgaria.

But the things which moved Ibn Fadlan by their strangeness will not do the same in a modern D&D player. Pluck any person from 10th century Baghdad and show them a Rus merchant and they’ll be seeing something, someone, totally new and unfamiliar. Do the same with a modern RPG player and they’ll just say: “So is this like Vikings or what?”

So Meager Country v2 must be both more historically grounded and more divorced from historical reality. Its world must emulate the political and economic state of the 10th century Arab world, the state which made the journey of Ibn Fadlan to the Bulghars possible, but also be full of new wonders, aja’ib in Arabic, which arouse the same reactions which Ibn Fadlan felt but in the mind of a modern observer.

It’s nice to make nice aesthetic plans but putting them into action, turning them into content is another thing entirely. So what will I do? What will give Meager Country v2 the qualities described above?

1.       Incorporate more Arab beliefs about the far north.
One of the most enduring beliefs about the north in the Arab world was that it was home to Alexander’s Wall, a massive iron gate constructed by Alexander the Great to prevent two races of giants, Gog and Magog, from destroying the world. Such a thing could easily be a ruin left by some fallen civilization, in true OSR style, but it could also be run as a legendary location whose existence is up for debate. I think many of the more eccentric ideas about the north which make their way into Arab sources could be turned into a rumor table and add a layer of doubt to the game.

2.       Add odder folk and folk ways.
I like all the weird kinds of people I wrote for the Meager Country, however I don’t think I emphasized their odd customs enough. I want to get to a point where there’s a sense of culture shock, though I think that might an impossible goal. I should focus more on the strangeness of the different peoples. There should be more odd food, weird rituals players are asked to partake in, more opportunities for faux pas, and I should put players more often in the role of cultural teachers. The Silent Trade will have to mentioned more.

3.       Make travel more dangerous and make stumbling on points of interest more likely.
Though some parts of travel should feel vast and trackless, I want some portions of the game to feature difficult journeys, maybe using wilderness dungeons, or by making use of a deadlier random encounter table. I’d also like to have a high density of interesting locations, maybe by using a few wilderness location tables or just by writing a dense hex map. I could also use some rules for fording rivers.

4.       Focus more on getting from the Empire to the Meager Country
It took Ibn Fadlan a while to just to get to the lands of the Samanids and he visited many cities along the way, he even had to lay low at a little bit. It could be interesting to experiment with starting the campaign as a game about getting the right letters securing passage and greasing the right palms to contrast with the hexcrawling that follows.

5.       Modify what is found in historical sources to create new and evocative content
Just taking things from history is not enough, these ideas must be modified, amended with the fantastic, to strike the tone I want the Meager Country to have. I think that even the fantastic and mythological elements found originally in history should be altered so that some part of them is still unexpected, still unique to the Meager Country.

Now I have a much better idea of what Meager Country v2 should feel like as well as how it will play. It should be a much more player driven game, where there’s less a mission from an imperial authority but just a direction. I think I’ve already been applying some of the above principles, especially #5, but having them written down and codified will help me keep focused on what I want the Meager Country to be as I go forward.

As always, thank you for reading the most idle, content deprived of my musings.


This post is dedicated to Thomas Noonan, who counted coins