Fall at Old Uppsala - and a Beyond the Fence post mortem 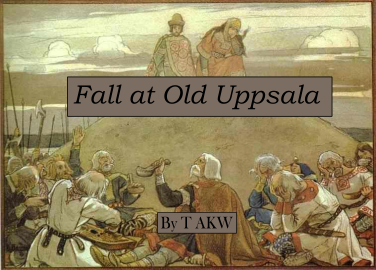 It's done! The first scenario published for Beyond the Fence, Below the Grave is up on itch.io!

It's been really fun play testing the system and developing this scenario for it (which, in my honest option, is the best scenario ever written for Beyond the Fence!). Now I have a much better sense of how the system performs. I wrote it partially because I wanted to explore the Old Norse milieu in more detail (and also because of the folklore jam) but also because I wanted to apply OSR design principles to a game without a dungeon. I'd say that it's been a success. The system's rules are flexible and welcome improvisation. The focus on investigation is a good substitute for the dungeon, probably because players succeed in both situations by asking the right questions.

On the whole, I'm impressed by how engaging Beyond the Fence can be for both players and GMs.  The dropping essence scores keeps the tension building. The need to perform a crisis ritual helps the players stay focused. I've had parties fail while running Fall at Uppsala and others succeed and each time it's been a pleasure to watch them bend under the pressure and try to put all the information together at the last minute.

The system needs a good scenario, with high stakes and dense mystery, to function but when it does it's really, really good. If it has a major issue, it's that the system is a one trick pony. It doesn't have a way to make investigation #6 different from investigation #1 and I have no clue what a Beyond the Fence campaign would look like. I'm also worried that I demand too much familiarity with Old Norse society and mythology for the game to be accessible, but I'm trying to remedy that by adding some basic notes on historical context to everything I publish for Beyond the Fence.

Right now, I feel that each of the specialties could use more play testing, but the potential of Beyond the Fence is still great. There are many more parts of the pre-medieval Scandinavian world that I want to represent in the game. I want to explore trading towns and the borders of Saami territory and shores of a just settled Iceland. I want to write about the concubines of jarls and Muslim merchants in the north and about more fishermen and upstart raiders and farmers.

So the first scenario is done, but there are many more to come!


This post is dedicated to Gustav Strom, translator of Heimskringla
Posted by T AKW at 2:39 PM 2 comments:

Email ThisBlogThis!Share to TwitterShare to FacebookShare to Pinterest
Labels: Beyond the Fence, Theory, Vikings

Dungeons often seem like the domain of chaos, full as they are of monsters, danger, and opportunity for profit. But there's still some order and it is maintained by the D.S.C. (that is, the Dungeon Standards Commission). The commission supplies traps, wandering monsters, and design advice to wizards, evil overlords, and dragons of all varieties. The commission's regulations apply to all lairs, ruins, tombs, and forbidden temples. But the D.S.C needs boots on the ground, constantly peering into the homes of its clients to make sure everything is done according to code. You have no salary. You have no clear route to promotion. You have almost no authority. You are a Dungeon Inspector. And you are expected to submit a report about each dungeon you encounter.

Dungeon Research
You can spend a day doing research on a dungeon in the D.S.C archives. Roll 1d6 + your Dungeon Inspector Level + 1 for each extra week you spend researching. Divide the result by 2, rounding down. You may learn about a number of features of the dungeon equal to the divided result.

Friend of Vermin
Unless you provoke them directly, non-sentient dungeon dwelling creatures (such as slimes, rats, bats, carrion crawlers) will prefer to attack creatures other than you first.

Deputize
You can force a sentient dungeon denizen of roughly grunt rank to do your bidding. It is not obliged to attack its own kind. You are responsible for this creature's well being, if it dies you will be charged a fine equal to the creature's HD x 10gp.

Machine Code
Most dungeon machinery operates on standard principles known to all D.S.C technicians. By examining a machine or other type of mechanism in a dungeon, such as a switch or system of gears, you can figure out what the machine is and does.

Enforce Regulation
Once per dungeon, you can declare a feature of the dungeon to be in violation of the D.S.C code.
If the feature is successfully declared to be in violation, it is immediately scrubbed from the dungeon. Monsters are removed, treasure is liquidated (you get 25% of the value), traps and parts of architecture are moved back into storage. Your deceleration has a your Dungeon Inspector Level in 8 chance of being accepted by the commission. This chance can be increased by 1 in 8 for each specific violation you cite. The council (i.e the GM) has final say over what counts as a violation but feel free to argue. Expect new features to replace ones found to be in violation if you ever return to the dungeon.

Code Violations:
Universal Violations: Does not fit the dungeon's 'theme', Uninspired design/too generic
Treasure: Not hidden well enough, value too high in relation to ease of finding
Monster/Faction: Too aggressive/refuses to negotiate with adventurers
Entrance/Architectural Feature: Reveals nothing of the dungeon's history/present goings on
Trap/Hazard: Impossible to detect preemptively, Impossible to overcome

Increased Justification
You have achieved a high enough rank in the D.S.C that you may treat any multi-floored structure as a dungeon for your purposes.

Starting Equipment: 1d6 sheets of paper, ink and quill, a burlap sack, 20ft of hempen rope, a letter confirming your identity marked with the seal of the D.S.C 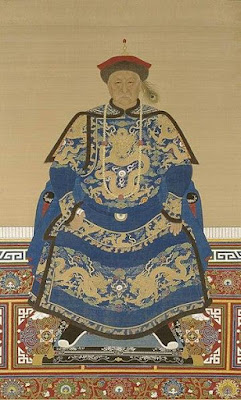 Portrait of the Oboi, regent of  the Kangxi Emperor


This post is dedicated to the High Commissioner Lin Zexu
Posted by T AKW at 8:36 AM 4 comments: