Cowboys and Conquistadors: Looking for New Models of the Adventurer 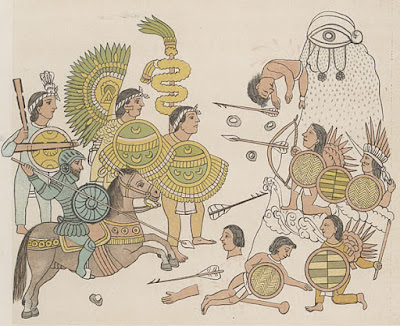 Dungeons and Dragons is about adventurers. A D&D campaign consists of a string of adventures with downtime stretched between them. These ideas didn't come from nowhere. In his 3 part essay, The Sociology of the Murderhobo, Boris Stremlin explores the literary roots of the adventurer, as they are portrayed in D&D, and looks for a model of the adventurer not as a literary archetype but as "a social type" which emerges in early modern history.

In my opinion, Stremlin's essay series is one of the best fruits of the D&D blogosphere. It's articulate but not too inaccessible, well argued, and reveals both the interesting history of D&D and new ways of playing it. Though D&D owes much of its original conception to literature, Boris' analysis suggests that the fantasy of D&D is far from a-historical. The genres which inspired D&D (Weird Fiction, Sword and Sorcery, and Heroic Fantasy) all take influence from the historical and cultural context from which they emerge.

Boris finds that the literary forebears of D&D, in one shape or another, reflect the history of colonialism. The protagonists of Sword and Sorcery are strongly reminiscent of Cowboys from American Westerns. The protagonists of Weird Fiction confront "the immigrant, the politically mobilized but still undereducated industrial worker, the native" as often as they do the cosmic. Though Boris does not touch on the legacy of colonialism and race in Tolkien's epic fantasy, the connection is not difficult to make. (Sidebar: Though James' article explains the history of Tolkien's Orcs well, I feel that he draws too harsh a division between Europe and the steppe. There is a rich and complicated history of interaction between nomadic and sedentary peoples in Eastern Europe.)

All these genres also employ a distinction between a civilized zone, where protagonists hail from, and a frontier where the main narrative action takes place which makes a heavy impression on D&D. In Westerns and Sword and Sorcery this divide is most literal. In Weird Fiction these are frontiers of knowledge as much as physical spaces. The position of Rangers in Tolkien's books attest to a border existing between two civilizations if not between civilization and frontier.

4th edition's so called 'points of light' setting operates on the assumption that the world is composed mostly of "wild, uncontrolled regions" with city states between them. Similarly, in the very title of Gygax's Keep on the Borderlands the same dynamic is represented. There's a Keep, civilization, and the Borderlands, the frontier. Granted, not all D&D settings and adventures maintain a frontier vs civilization theme, but it's telling that this theme stretches from a core assumptions of a modern edition of the game right back to a module intended to introduce new players to it.

Though the legacy of colonialism is certainly sanitized in D&D, it is still present in the game's basic ideas. When we tell stories around the table of civilized heroes venturing beyond the borders to beat back the forces of chaos again and again we should take pause and consider what kind of narrative we are participating in. I'm certainly no less guilty of doing this than anyone else. Boris himself has pointed out how I project the frontier/civilization division onto my own Meager Country.

The connection between D&D and colonialism is also not new. I've begun with Boris' essay but others have reached similar conclusions by different means. But the question remains: in light of this, how should we change the way D&D is played?

I think we need to base our campaigns off different types of adventurers who are not cowboys or conquistadors and we can find such figures in history. We need to look to the past for new stories, new protagonists, different relationships between 'civilization' and 'frontier.' This effort will not just remove a problematic element from the game but broaden the horizons of what can be represented at the table drastically. 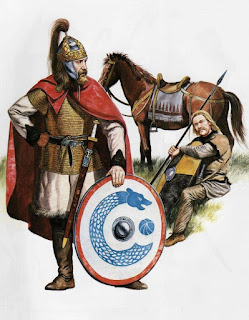 
What is an adventurer?

As Boris describes in the second part of his essay, the early modern adventurer is somebody who manages risk, be they a mercenary, merchant, or financier. The adventurer exists in a time of social change. Established hierarchies are starting to wobble. Great opportunities for disaster and success are emerging. The first adventurers were also the first colonizers. Hernán Cortés, Samuel de Champlain, and John Winthrop fit the word well. But Boris draws our attention to other kinds of adventurers through his discussion of the Ashkenazi Jewish diaspora. This group doesn't appear to be very adventuresome when stood beside the conquistador, but commonalities soon emerge. The Polish-Lithuanian Commonwealth of the 14th-16th centuries, still developing and capable of offering greater religious freedom, is certainly a kind of frontier. Managing a business and setting up a community far way from one's home certainly requires a skill in managing risk. So an adventurer is not necessarily a colonizer and a frontier is not necessarily a terra nullius.

What we are looking for is this: other conditions under which the adventurer as social type can exist. We are looking for groups of people who choose or are put into situations which require the management of risk to protect their communities or to move up the social hierarchy. These adventurers will also exist in times of change, whose outcome may depend heavily on their choices, failures, and victories. The frontiers they venture to may be states in crisis, far off lands in need of expertise of all kinds, or regions where valuable resources can be obtained.

Here are a few examples of good models of the adventurer, most drawn from the excellent Gundobad Games blog.

The Sea People (and others) of the Late Bronze Age Collapse

The international order of the Late Bronze Age relied on trade and communication between rulers facilitated by mobile populations. Such populations had great power to support or subvert the social order and can be easily seen as adventurers.

The Visigoths of the Late Roman Empire

The Visigoth were one of many groups forced into Rome's borders by the advancing Huns. The Visigoths faced great challenges in the form of corrupt Roman officials and anti-barbarian politicians as they became more and more integrated into the empire. A campaign based on this period would see the player characters adventure to ensure the safety and continuity of their community in exile.

The Vikings of the Viking Age

The Vikings traded, raided, and explored all the way from the White sea to Constantinople and beyond. Driven to win social status back home, pursuing economic advancement, and stimulating change at home and abroad makes the Vikings fit the model of the adventurer almost perfectly.

These are just three examples but in them is an incredible diversity of campaign concepts. I feel like D&D could have been founded on any of them as easily as on fantasy literature. But more remains to be discovered, more models await discovery by game masters who can pay careful attention to history.


This post is dedicated to Marshall Hodgson
Posted by T AKW at 8:29 PM

Email ThisBlogThis!Share to TwitterShare to FacebookShare to Pinterest
Labels: Theory