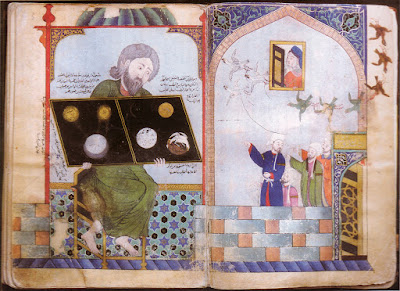 Count yourself lucky to live in this day and age. In antiquity there were many marvels, but much was  lost. There was great glory, but it faded and fell away. There was much knowledge, but it was mixed with falsehood. Today we have the Way. As we step from the past into the future, we search for what embers of the old are worth salvaging.

In 690, following the civil war, ancient treatises on light and the shape of the world and the workings of the organs were brought to the court of the Successor. 719 saw the secret of glass working rediscovered, recovered from the Women who protected it. Now, the Pale Folk study their bodies under the light of the full moon. Blood vessels and nerve endings are mapped, like rivers in a foreign country. Every city has a new hospital and every governor is advised by astronomers and mathematicians, whose fields did not exist a few decades before. Engineers invent luxurious fountains and pump black oil from the earth. The chemists distill tinctures or serums and pass them to physicians for experimentation. Just last year, a cataract was plucked from an old woman's eye, as if by magic. Today I saw a man with an astrolabe, and he taught me to understand the sky.

There is light and conversation and music in the Successor's house. In libraries and schools creed and sect mean nothing, as all are brought together in the pursuit of what is good and what is true. Barren hills become observations, opening the pages of the heavens. The scribes labor over books and copies of books. They translate from papyrus to paper, from the old languages to the tongue of today. But don't just take my word for it, take a closer look.

Linger after prayers, hear the dialogue among the congregants. They talk of infinity and space, eternal or finite. Buy sherbet and flavored ice in the market. It is sweet and cold and your tongue has never known its like. And look at these, 12 marvels of our modern knowledge, each an ingenious and extraordinary fruit, plucked from the orchard of the Way, growing in antique soil.

Each would make a splendid gift, each would fetch a mighty price, each is unlikely to be found or even understood outside the Successor's domain. 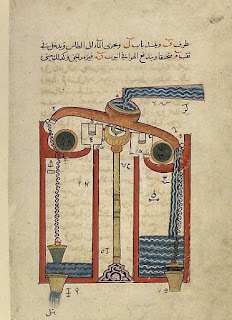 1. The Spy Glass: A brass tube with several lenses fitted inside. The tube is beautifully engraved with images of (1. Birds 2. Stars 3. Flowers 4. Horses). When held to the eye, the Spy Glass makes far away objects appear closer. The lenses can be removed and used as magnifying glasses.

2. The Water Clock: An unwieldy brass and lacquered wood box with the numbers 1-12 written on it and a small arm set into it. When water is poured into a spout in top of the clock, the arm moves across the face of the clock, from one numeral to the next in the course of an hour, resetting to 1 once reaching 12. The clock must be refilled and recalibrated once a month and can’t function in the cold.

3. The Hydraulic Servant: A small metal automaton dressed like a nomad from the north. It has a control panel on its back and is powered by water. The automaton can be programmed to do simple tasks, such as carrying things, opening doors, or grabbing things but it can only be programmed to do one task at a time. A liter of water is enough to power the automaton for a day, it cannot be operated in the cold. Secretly, the automaton has a little magic within, it cannot be detected as magical but will be effected by dispel magic, anti-magic zones, ect.

4. The Perpetual Flute: A contraption powered by water consisting of two flutes, two water reservoirs, and a tilting pipe into which water is poured. The flue can be programmed to play any tune or even make sounds like speech but quickly repeats itself. A liter of water is enough power the flute for a day, it cannot operate in the cold.

6. The Hurricane Lantern: An oil burning lantern made of a wick held in a brass body protected by a glass dome. Its flame cannot be extinguished by winds and it trims its own wick via an ingenious mechanism.

7. The Nostril of Bahamut: A heavy weapon that uses a handpump and tube to cover enemies in sticky, burning oil. The Nostril’s maximum range is 20ft. The oil burns for 2d4 damage a round and cannot be extinguished by water. A burning target can smother the flames by taking a round to stop, drop, and roll. If the Nostril’s pilot wick is not ignited before being fired, it just covers targets in oil. Liquids other than oil can be propelled using the Nostril.

8. 1d6 Naptha Pots: Clay jars full of oil, sulphur, and nitrates plugged with a wick. Several seconds after ignition, the jars explode, dealing 2d8 damage to everything within 10ft of it.

9. The Compass: A magnetized piece of metal suspended in water and laid over the four cardinal directions. It always points north.

10. Physician’s Kit: A box the size of a suitcase containing the latest innovations in medicine. It is full of herbs to treat different ailments and infirmities, smelling salts, acid for cleaning wounds, and soap for cleanliness. A kit has 2d4 charges. Each charge can be used to restore 1 point to a damaged ability score, let a person reroll a save against disease, or restore a creature to consciousness. Additionally, the kit’s charges may have other uses. The herbs are good for cooking, for example.

11. 1d6 Lightning Bombs: Like a naptha pot but filled with pyrotechnic compounds. Explodes in a blinding flash which disorients sighted beings within 10ft of it.

12. The Hollow Needle: A metal tube with a plunger at the back and a sharp piecing tip. The needle creates suction. It can be used to carefully and precisely extract fluids or small objects, such as parasites or contaminants, from the body or just suck up liquid. The effects of potions administered via the needle last 2 rounds longer.

Further Reading: This post is inspired by the Golden Age of Science in the Islamic world, but the inventions on this list are not all accurate to the period. The telescope, for example, was invented in the 17th century in the Netherlands. If you'd like to know more about this period, I'd suggest watching Jim al Khalili's Science in a Golden Age series or just reading "List of inventions in the medieval Islamic world" on wikipedia as a start.


This post is dedicated to Kallinikos, the petroleum consultant
Posted by T AKW at 5:38 AM