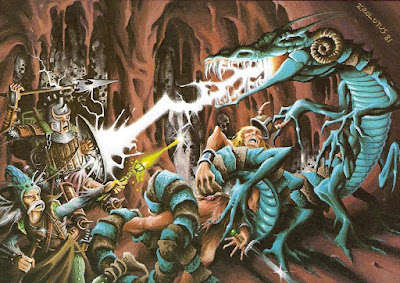 For the last few months, I’ve been running GLoG. Not rat on a stick edition or Mimics and Miscreants, but the original Goblin Laws of Gaming published in the halcyon days of 2016. Since then a tremendous number of GLoG hacks have been written and each has decided to carry forward or abandon elements from Arnold K’s original ruleset. For me it’s been valuable to experience the original rules first hand and see how my players, all new to the OSR, reacted to them. I hope to share what I’ve noticed and bring some less copied parts of the rules into the light of the GLoG-osphere again.

GLoG’s stat generation and its use of stealth and movement stats are used to make the game riskier in specific ways. Rolling 4d4, instead of 3d6, to generate stats lowers the maximum stat one can roll to 16, raises the minimum to 4, and makes it more likely for any stat to be roughly 10. This is a break from tradition but it works well with the roll under rules. Characters with an 18 strength have a slim chance of ever failing a strength roll made on a d20. But characters with 16 strength are still strong but doubly likely to miss their target number. The new equation for deriving stat bonuses has a similar effect, but the calculation is so fiddly that I’d much rather have a table with the values of each stat.

Stealth and movement are also not usually carried into GLoG hacks. They seem a bit redundant, many GMs would much rather have players roll dex. But GLoG wants most characters to be equally good at running away and for the odds of escape to be likely, so the base movement is 12. The same is true of stealth, but the system would prefer players to run instead of hiding, so the base stealth is 9.
Rolling the dice in GLoG is always risky to encourage players to avoid doing so. But the system’s numbers want to make certain actions riskier than others. Making ability rolls should always carry significant risk of failure, but fleeing should naturally be a little more likely to result in success.

I feel like convictions are a good idea but not a great tool. The way Arnold intends them to be used in the original rules makes sense. He wants to encourage more risk taking and role playing, but the application of the rule feels very narrow. Players, in my experience, won’t go very far out of their way to take risks and the conviction system doesn’t do much to help that. The design feels very carrot and stick, it tries to manipulate player psychology without adding much to play. I think I’d like convictions more if there was a table of them so at least players always started with a sense of what motivated their character from the get-go.

In play, I’ve found that convictions are more interesting if they’re used more like inspiration from 5e. If the parameters of what counts as acting to your conviction is broader then players are more interested in looking for opportunities to earn their conviction point. Personally, I like the idea of inspiration being tied more strongly to a particular character motivation instead of being nebulously awarded for good role playing. I, however, see how this approach doesn’t work for every GM’s style. 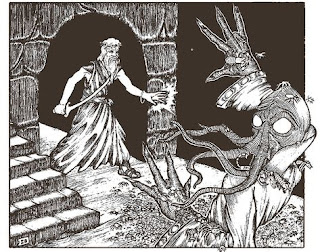 The skill system is another clever idea but a poor tool to use at the table. The 2d12 skill rolls and skill progression are interesting but they don’t get a lot of attention in play. The amount of complexity they introduce feels unwarranted.  I’m also not sure about what sort of things skills should cover. The vagueness is freeing, yes, but the guidelines in the rules only tell me what skills should not be, not what they should be. A lot of refereeing for GLoG comes down to enforcing the philosophy behind the rules but there’s almost nothing to go off of here. As a GM, the skill guidelines empower me to say ‘no’ but not ‘yes’ to player suggestions.

GLoG class design has changed drastically from the original Goblin Guts classes. In my experience, the original classes are a mixed bag. I love the barbarian, whose powers are all unique and uniquely useful, but the acrobat gets a hodgepodge of situational advantages which are nowhere near as interesting. Perhaps it was just my players, but nobody seemed particularly enthusiastic to play any of the original classes. The ingenuity of players is supposed to be more important than the power of their characters and so the classes take a back seat, seem less appealing. I’m perfectly ok with this, but I feel like the classes could use more energy, more interesting tools to use from 1st level. In my game, we started choosing classes randomly from the complete table of GLoG classes, which improved the game noticeably.

The stacking template bonuses are also an interesting feature which has become less popular. Original GLoG characters are supposed to get numerically better in many ways as they level up, their save rises, their attack rises, and another number on their character sheet usually increases as well. There’s a general consensus, I feel, that a broader toolbox is a better reward for leveling up than numerical increases but I feel there’s a good balance to be struck in the middle.


This post is dedicated to Sam Vimes
Posted by T AKW at 6:51 AM